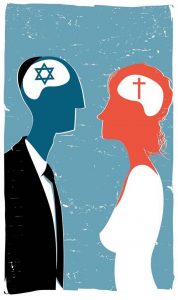 BY LINDA LEWIS GRIFFITH
Special to The Tribune

Interfaith marriages are unions between persons from different religious backgrounds. They come in all permutations, from nearly similar faith groups to vastly divergent practices, even ardent believers and atheists.

And they’re on the rise.

Before the 1960s, about 20 percent of couples were in interfaith relationships. By the first decade of this century, that number had climbed to 42 percent.

In an April 5, 2013 op-ed piece in The New York Times, author Naomi Schaefer Riley wrote that “secular Americans welcome the rise of interfaith unions as a sign of societal progress,” noting that the increasing intermarriages of American Muslims mirrors the assimilation of American Jews in earlier generations.

Jews married to gentiles divorced twice as often as Jewish couples (35 to 16 percent). Yet Catholics in interfaith marriages stayed married at the same rate as Catholics married to other Catholics.

The survey found that the more religiously active spouse tended to be the unhappier one.

These data may reflect the unique issues that challenge interfaith couples, such as parental disapproval of the marriage, conflicts regarding child-rearing, a feeling of spiritual isolation or lack of core beliefs.

What Pitfalls Should I Recognize Going Into A Multicultural Relationship?
YourTango

Many interfaith couples do survive, however, and rely on unique strategies for handling their faith-based differences. Some parties withdraw from any religious observance. They stop going to worship services and avoid religious discussions with their spouses.

Others assume a “lead religion” policy. One faith is selected as the dominant faith in the home, respectfully acknowledging yet not practicing the other belief system.

In 40 percent of interfaith households, one spouse converts to the religion of the other. This avoids any problems associated with two religions in the home. Yet, it is only successful if the conversion is sincere and accepted without pressure or guilt.

Partners may decide to leave their original religions and practice a new, mutually agreeable faith. They may seek a religion that blends both of their traditions or find a different, neutral spiritual home.

Families may choose to practice both religions simultaneously, going to one service Friday evening, another Sunday morning or celebrating both Christmas and Hanukah.

Finally, they can combine their two faiths into one unique religion, and serve as role models of compromise and diversity that all of us can aspire to.

Linda Lewis Griffith’s column is special to The Tribune. She is a local marriage and family therapist. For information or to contact her, visit www.lindalewisgriffith.com.