It is difficult if not impossible for Rabbis, Bishops, Pastors, Imams, Pundits, Shamans and others to let one of the members of their flock go, instead of losing them, they have chosen to take the step forward, ” with the condition that the couple share a Jewish home and lifestyle – after “almost a decade of consideration and discernment.” I welcome the Rabbis to take this step.

If a Jewish person seeks to marry a non-Jew and they plan to share a Jewish home, the couple can now have a wedding ceremony performed by any of the clergy at Anshe Chesed Fairmount Temple in Beachwood. 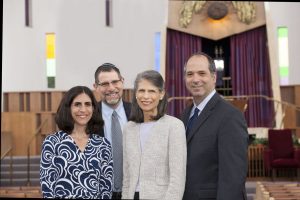 In a letter and an email sent last week to temple congregants and signed by all four clergy, it was announced that Rabbi Robert A. Nosanchuk, Rabbi Joshua L. Caruso, Rabbi Jordana Chernow-Reader and Cantor Sarah J. Sager are all open to officiating at interfaith weddings that meet this condition.

This policy is not new for Nosanchuk, the temple’s senior rabbi, or Chernow-Reader, whose title is rabbi-educator. But for Caruso and Sager, the move represents “an evolution in the approach,” the letter stated.

“This is something Cantor Sager and Rabbi Caruso chose to do after much study, discussion, experience and personal reflection,” Nosanchuk said. “It means (an interfaith) couple can approach any of us, and we will be as respectful as we can in helping them to build a Jewish home.”

While Nosanchuk is in his sixth year as the temple’s senior rabbi, Sager has been its cantor since 1980, and Caruso has served as a rabbi there since 2003. Chernow-Reader joined the temple’s clergy last July.

“This opens up opportunities for many more people who have known Cantor Sager and Rabbi Caruso for so long,” Nosanchuk said. “I have respected their positions up until now, and I respect their change of heart around officiating.”

Sager said for her, the decision was the result of “a very long process.”

“It is something that has always troubled me, almost from the beginning of my career,” she said. “Every time I have had to turn away (an interfaith) couple with whom I had a relationship with one or the other – when they sincerely wanted to be married in the Jewish faith because they wanted to create a Jewish home – that was very painful for me.

“It was very difficult to explain that it was not because I disapproved of them. It was because I didn’t think I belonged at the ceremony, in a situation where only one of the parties was Jewish, and yet that was a very painful position to maintain. I always questioned in the aftermath if it was the right decision.”

Over the course of her career, Sager said she has observed “too many authentically Jewish families” with couples who are raising their children as Jews and maintaining Jewish homes, and yet one of them has never formally converted to Judaism.

“The thought that they would have perceived that I ‘turned them away’ by not officiating under the chupah troubles me deeply, and I don’t want to be in that position anymore,” she said. “I want to be on the front lines of welcoming a couple that sincerely wants to create a Jewish home. That is the bottom line.”

Caruso was born to a Roman Catholic father and a Jewish mother, but was raised Jewish as his parents divorced when he was 3 and his mother remarried a Jew. He said he came to the decision to officiate at weddings between a Jew and a non-Jew – with the condition that the couple share a Jewish home and lifestyle – after “almost a decade of consideration and discernment.”

“As leaders in the Jewish world, rabbis must regularly assess how best they can serve their respective communities,” he said in an email interview. “In my view, from a Reform Jewish perspective, I have witnessed young people in my community who grow up to be proud Jews, but happen to find partners who are not born into the Jewish faith.

“The reality is not necessarily an indicator of one straying from his or her faith path. By officiating at a wedding that upholds the criteria I have set, I can honor a couple actively choosing to live a Jewish life and – if blessed – to raise Jewish children.

“I now feel that I am in a position to support and guide couples through this exciting time in their lives. If we want these couples to be active and involved members of our temple, we must welcome these couples with open arms.”

Sager she and Caruso will both speak about “our journeys that have brought us to this place” at the annual congregational meeting May 15.

“While there will not be sufficient time at the annual meeting to enter into much discussion of our positions after our presentations, we have and will continue to invite our congregants to discuss this with any or all of us,” Sager said.

*Synagogues were asked to respond whether their clergy perform interfaith weddings.