This is a high profile wedding, and would be watching this. It will have the same effect on the world as did Obama’s election on November 4, 2008.

Meghan Markle, Prince Harry’s Royal Wedding: The Race Factor And Its Effect On The British Monarchy 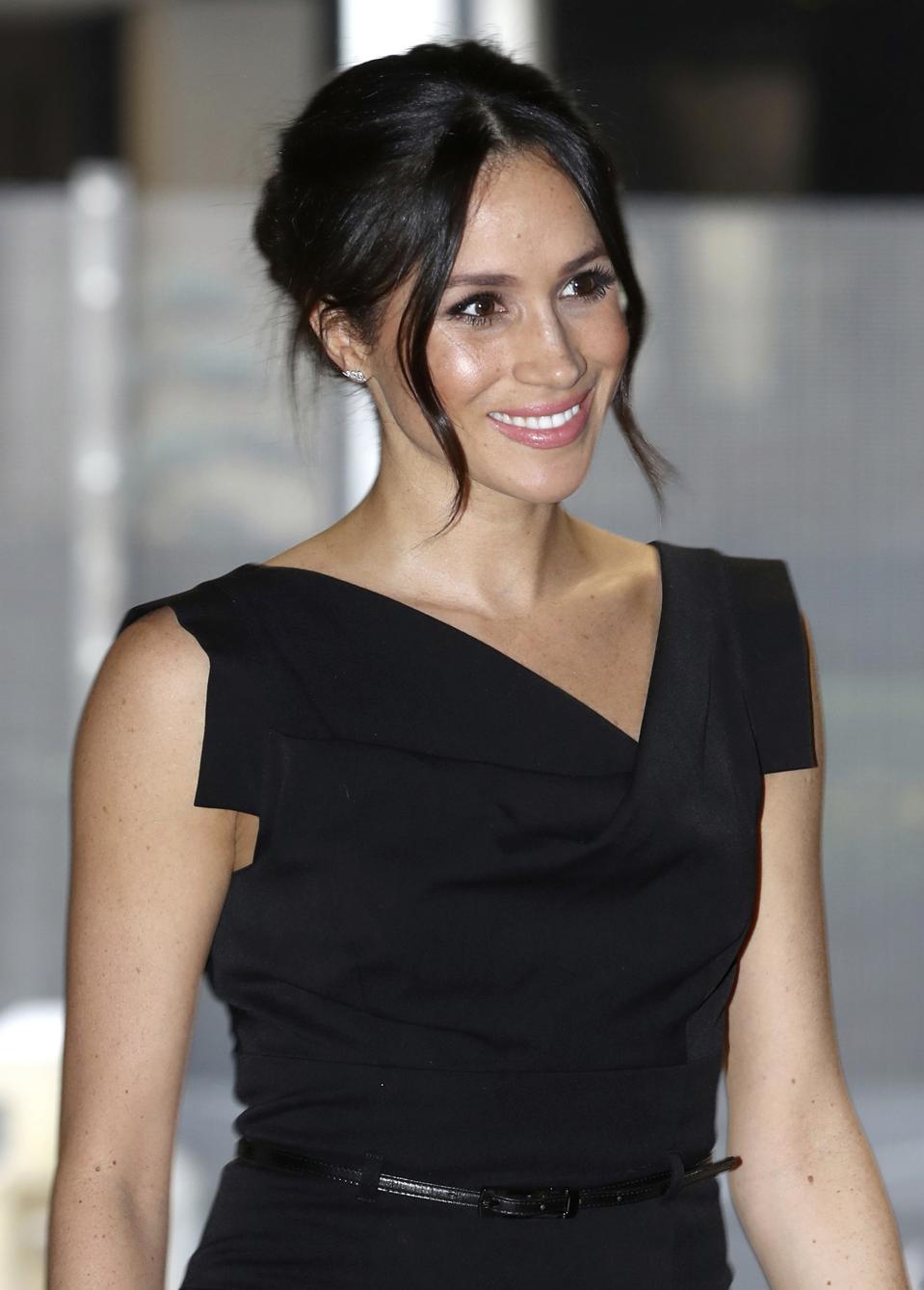 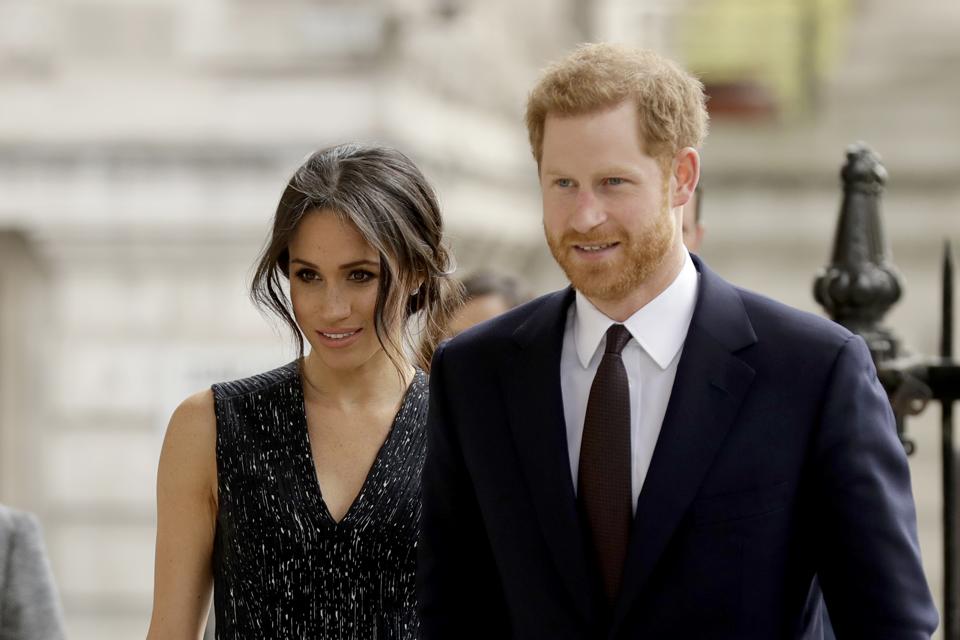 Prince Harry and Meghan Markle’s wedding will occur in five days and the enthusiasm and interest surrounding the “most modern royal romance” have reached a fever pitch of media coverage and global public interest.

Undoubtedly, a major aspect of the fascination is linked to the bride’s origins and identity, which have been acknowledged in a relatively quiet way throughout their courtship although seldom analyzed in depth. 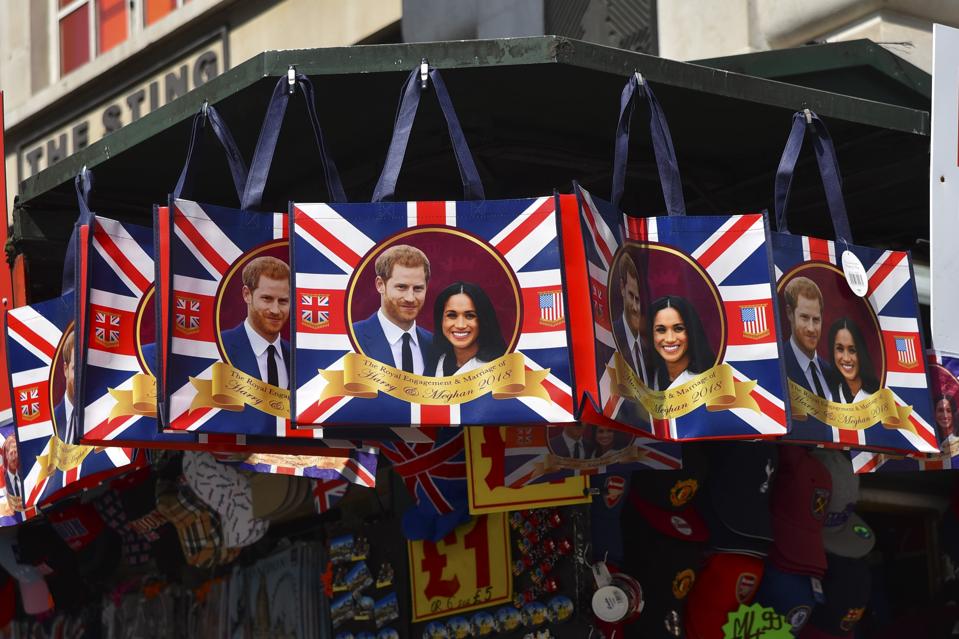 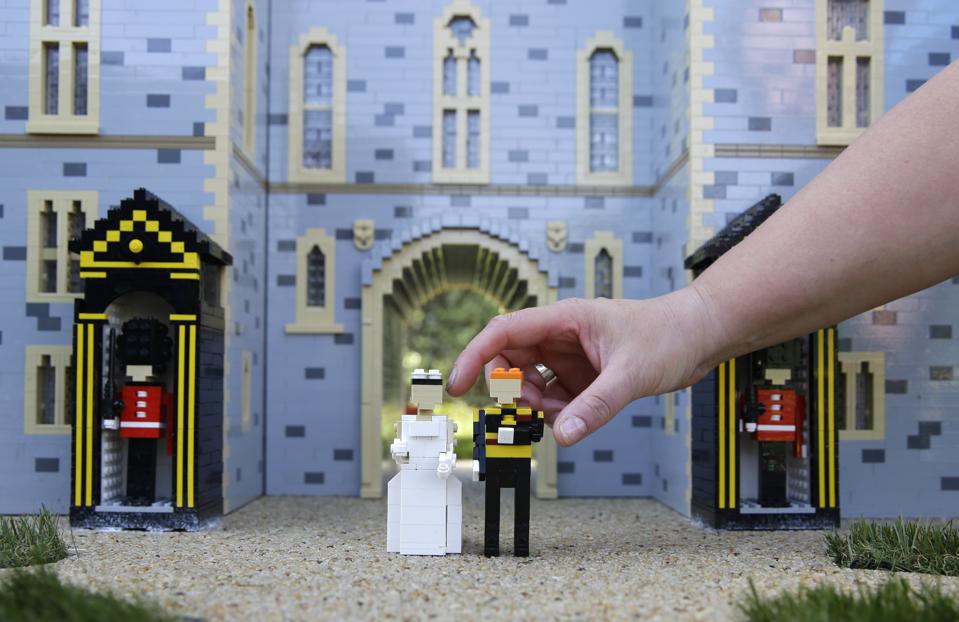 At Legoland in Windsor, a depiction of the upcoming royal wedding    Photo: Alastair Grant/AP

The mix of global curiosity and admiration (with some criticism and racial slurs mostly by the tabloid press) that have accompanied the romance of the American actress with the British prince and her ascendance to a place of universal impact now known as the “Meghan Factor,” have surpassed her immense influence on fashion.

She’s very astutely balanced her “unroyal” reality with what many see as her new “fairytale” one. Her style, open and seemingly truthful, strikes a nice note between forthright and refreshing. In that way, she’s talked frankly about her origins, her race, her career and her feminist agenda. “It’s time to focus less on glass slippers and more on glass ceilings,” she said of her own story. 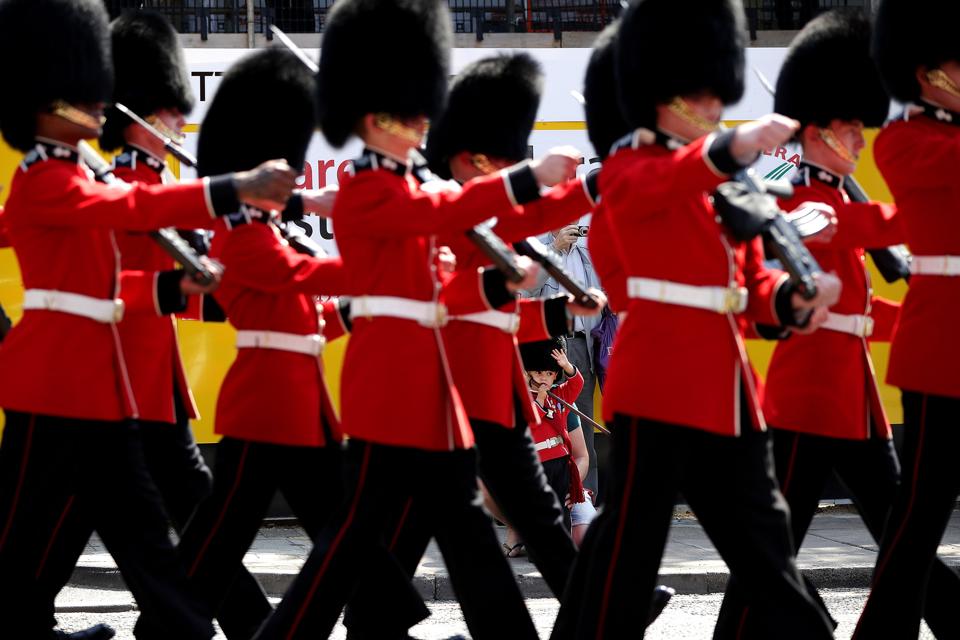 The Changing of the Guard rehearsal near Windsor Castle as the town, which gives its name to the Royal Family, continues its preparations for the wedding and the expected tens of thousands of royal fans   Photo: Dan Kitwood/Getty 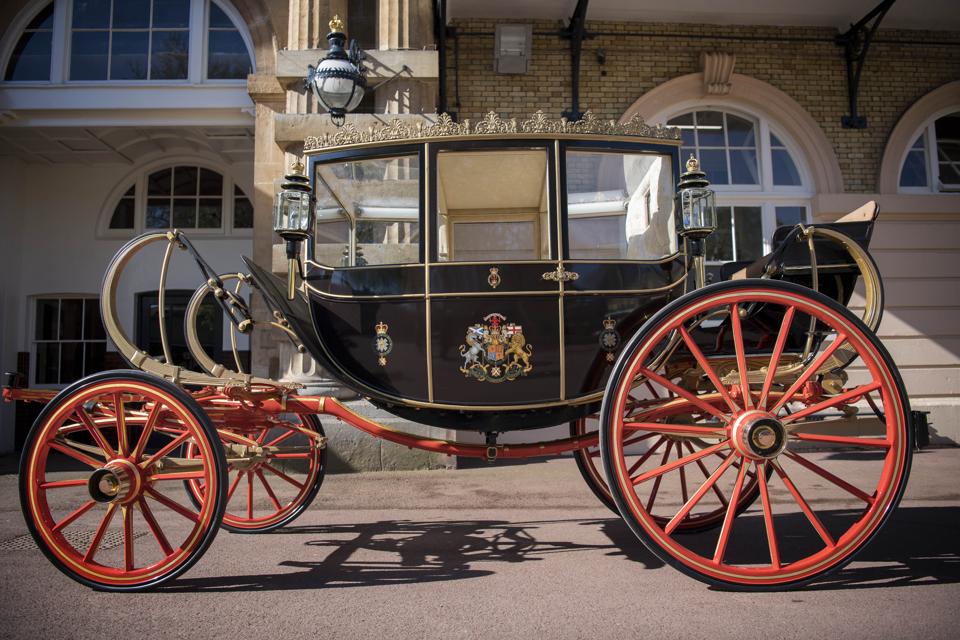 The Scottish State Coach which will carry Harry and wife along the processional route in Windsor following their marriage     Photo: Victoria Jones/AFP/Getty Images

Her position on racial inequality and relations has been open and public, sometimes pushing her future royal husband to take a stand. Some analysts expect an agenda of activities from the couple that in the future will include racial issues.

At the close of an essay she wrote for the magazine Elle in 2015 that established her racial identity and described her struggles and pride in being black, Markle wrote: “You create the identity you want for yourself, just as my ancestors did when they were given their freedom. Because in 1865 (which is so shatteringly recent), when slavery was abolished in the United States, former slaves had to choose a name. A surname, to be exact. Perhaps the closest thing to connecting me to my ever-complex family tree, my longing to know where I come from, and the commonality that links me to my bloodline, is the choice that my great-great-great grandfather made to start anew. He chose the last name Wisdom. He drew his own box.” 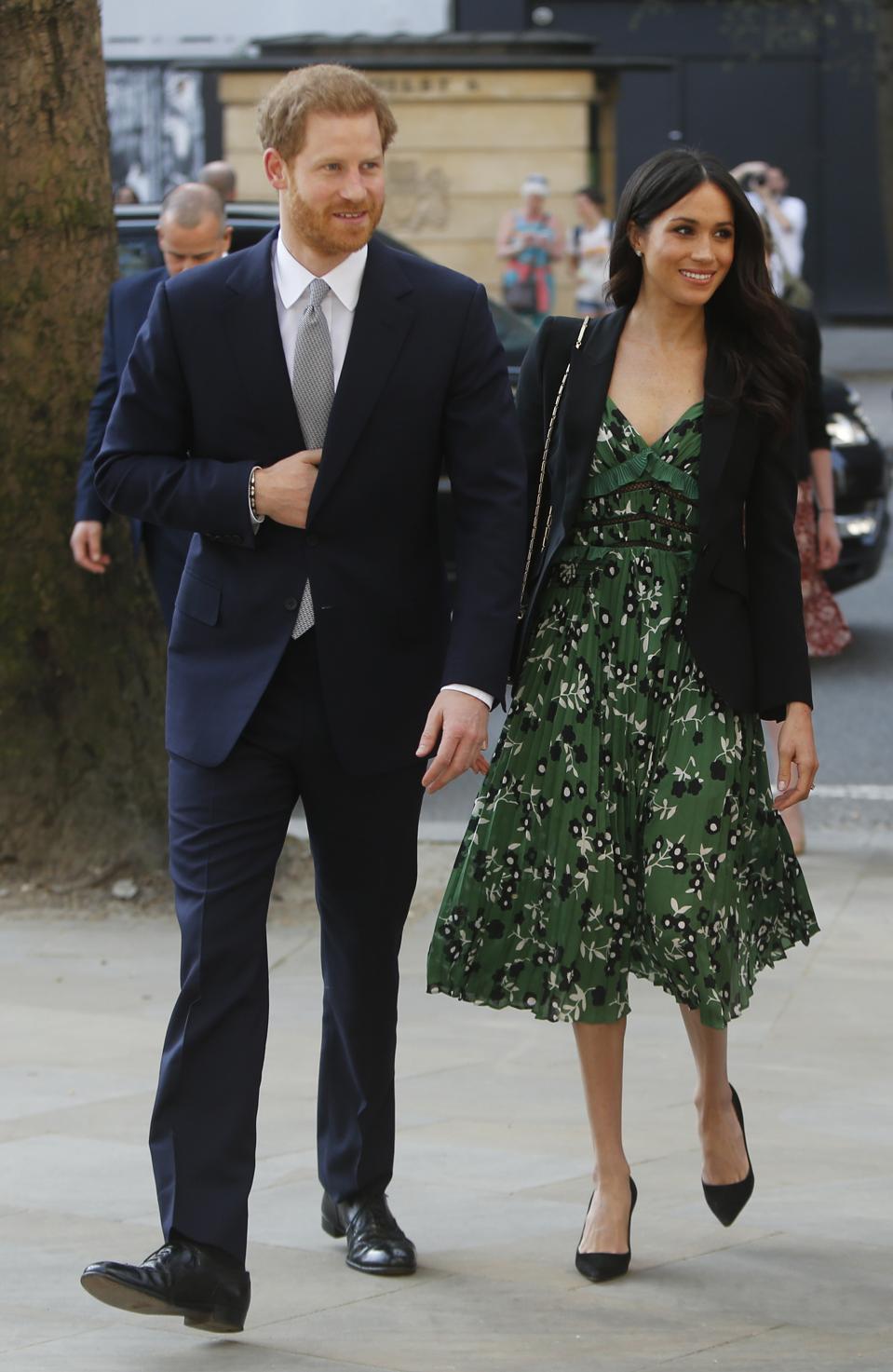 Harry and Meghan arriving at a reception hosted by the Prime Minister of Australia at Australia House in London      PhotoA: lastair Grant/AP

“How much does Meghan want to say and do?” asked a columnist in The Guardian. “We simply don’t know yet. Like any black and biracial woman, she has had a lifetime of learning to both confront and dextrously navigate codes that range from the puzzling to the vehemently punitive. Like every actress, she’s had to confront misogyny. But she has options that previous generations did not.”

Generally, the warm enthusiasm that until now has been bestowed on the American bride by most of the often-critical British press, and by the public, has been credited to Markle herself.

Her lean shoulders have been loaded, for now just in paper, among other burdens, with the heavy responsibility of affecting British-American relations, modernizing the monarchy, influencing the way young women in the world dress, transforming the fashion industry in Great Britain – and no less than having changed Britain’s attitude toward royalty and race,

A recent op-ed piece in The Guardian wondered if such a “radical addition” as Meghan, being a “well educated, divorced, woman of color and a feminist (would) revolutionize the house of Windsor.” 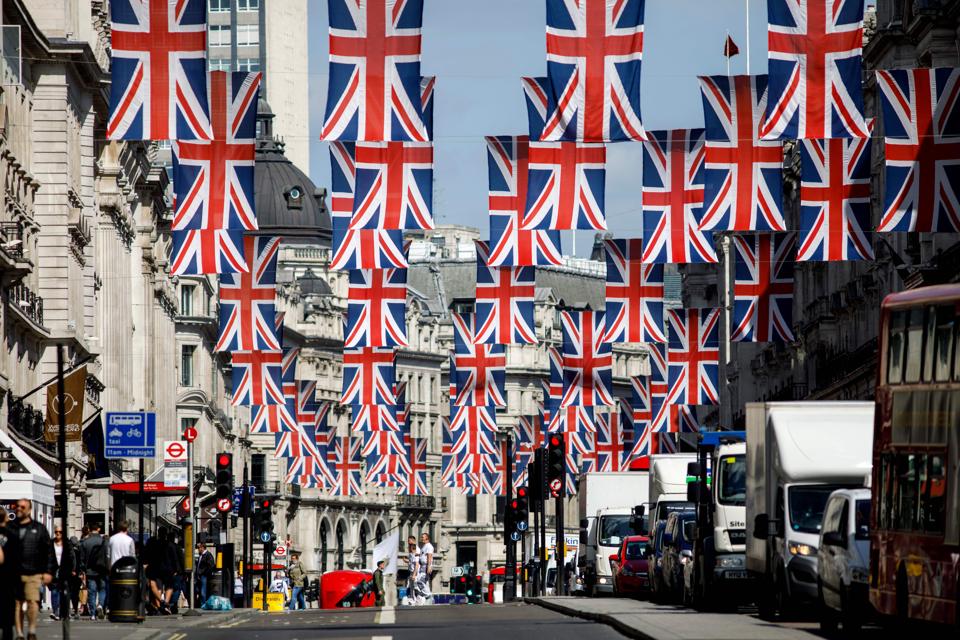 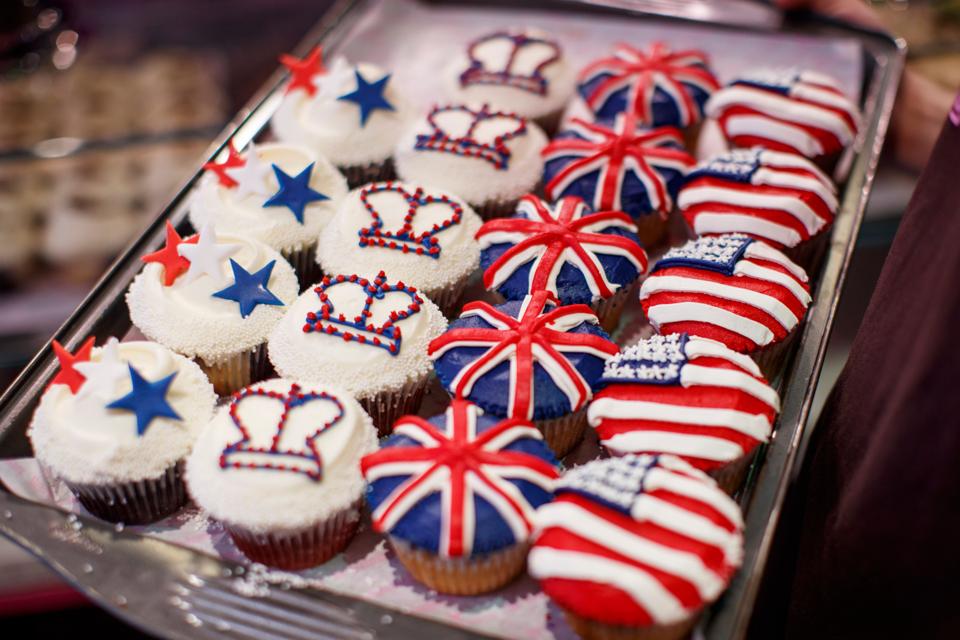 “The wedding of American actress Meghan Markle to Queen Elizabeth’s grandson, Prince Harry, marks an important moment for Britain’s black community,” Reuters reported. “The upcoming marriage of the British prince, sixth in line to the British throne, to Markle, whose father is white and mother is African-American, has been heralded as demonstrating how Britain has become more egalitarian and racially mixed.”

For many royal experts, it represents a clear change in messaging by the monarchy, especially to younger British generations, as it seeks to alter the idea that “blackness and Britishness are mutually exclusive,” as Afua Hirsch, author of a recent bestselling book, British: On Race, Identity and Belonging,” wrote. 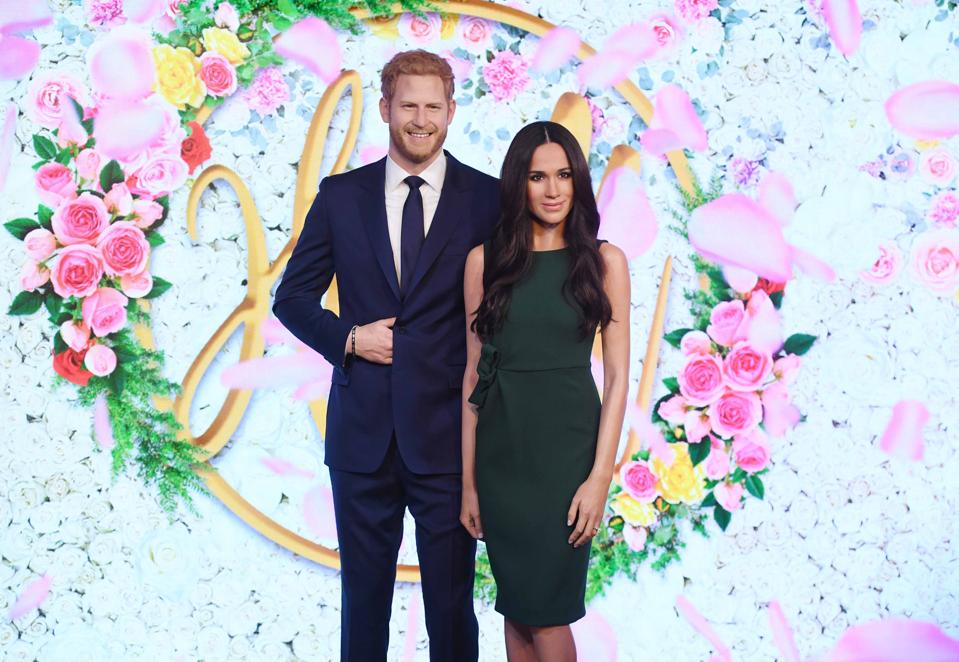 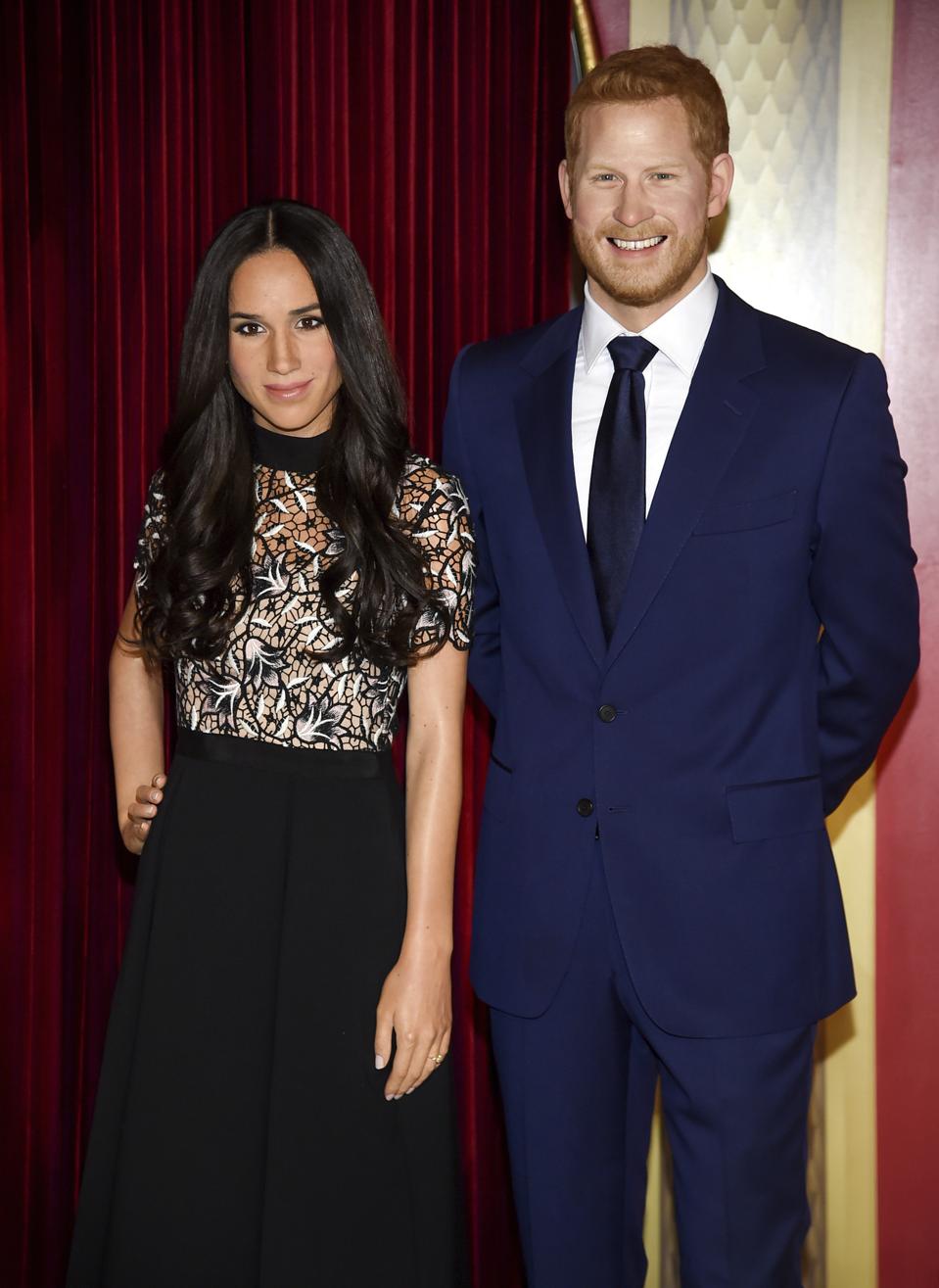 That message has spread especially because Meghan and Harry have an open and approachable styletoward the people they meet during public events that makes them appear more modern and egalitarian.

“It is difficult to overstate how important it is to have a member of the royal family…who is mixed race and embracing her heritage and stating that is very much part of her,” historian Ted Powell told the Observer: “It is hugely positive for Britain, particularly in the wake of Brexit and the controversies of immigration policy and race.’

Given the United Kingdom’s legacy of slavery, colonialism and racism, it’s too ‘fairytal-ish’ to believe that a mixed-race royal wedding – even one of the most popular in recent history and even if Markle maintains her public standing – will itself bring about meaningful changes. 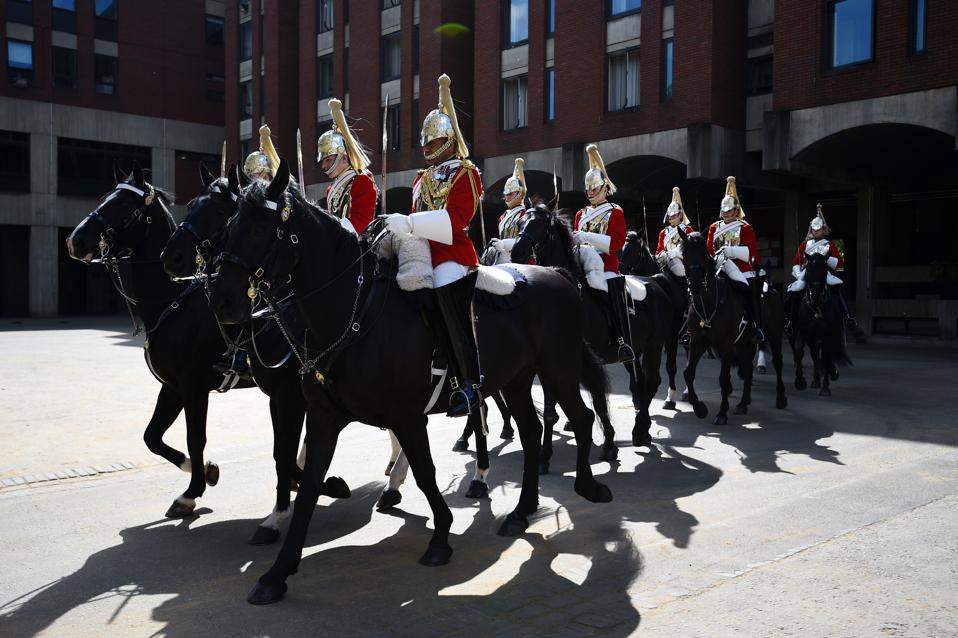 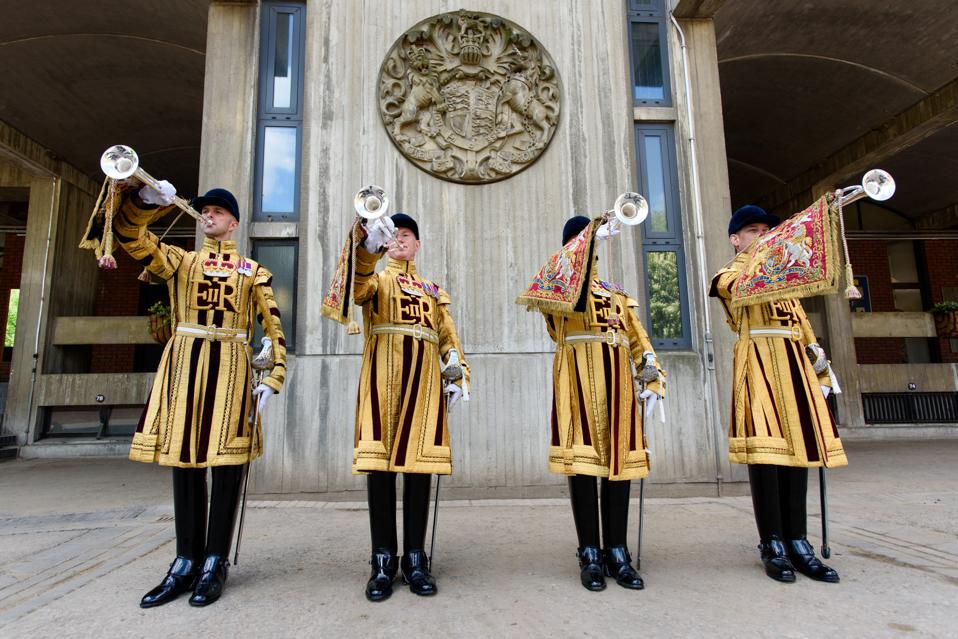 The Trumpet Majors who will play fanfares during the wedding service rehearsing at Hyde Park Barracks     Photo: Joe Maher/Getty Images

“The royal wedding is a complete non-event,” Kehinde Andrews, who teaches Britain black studies at the University of Birmingham, told The Guardian. “The idea that this is good for race relations is frankly offensive. Meghan Markle is a beautiful woman but the royal family doesn’t change because you have a splash of coffee. She isn’t a dark-skinned woman with an Afro. She looks like Pippa [Middleton] and dresses like Diana.”

Asked what the wedding symbolizes from an academic perspective, he said: “It doesn’t change anything. It just shows Harry has good taste in women.” 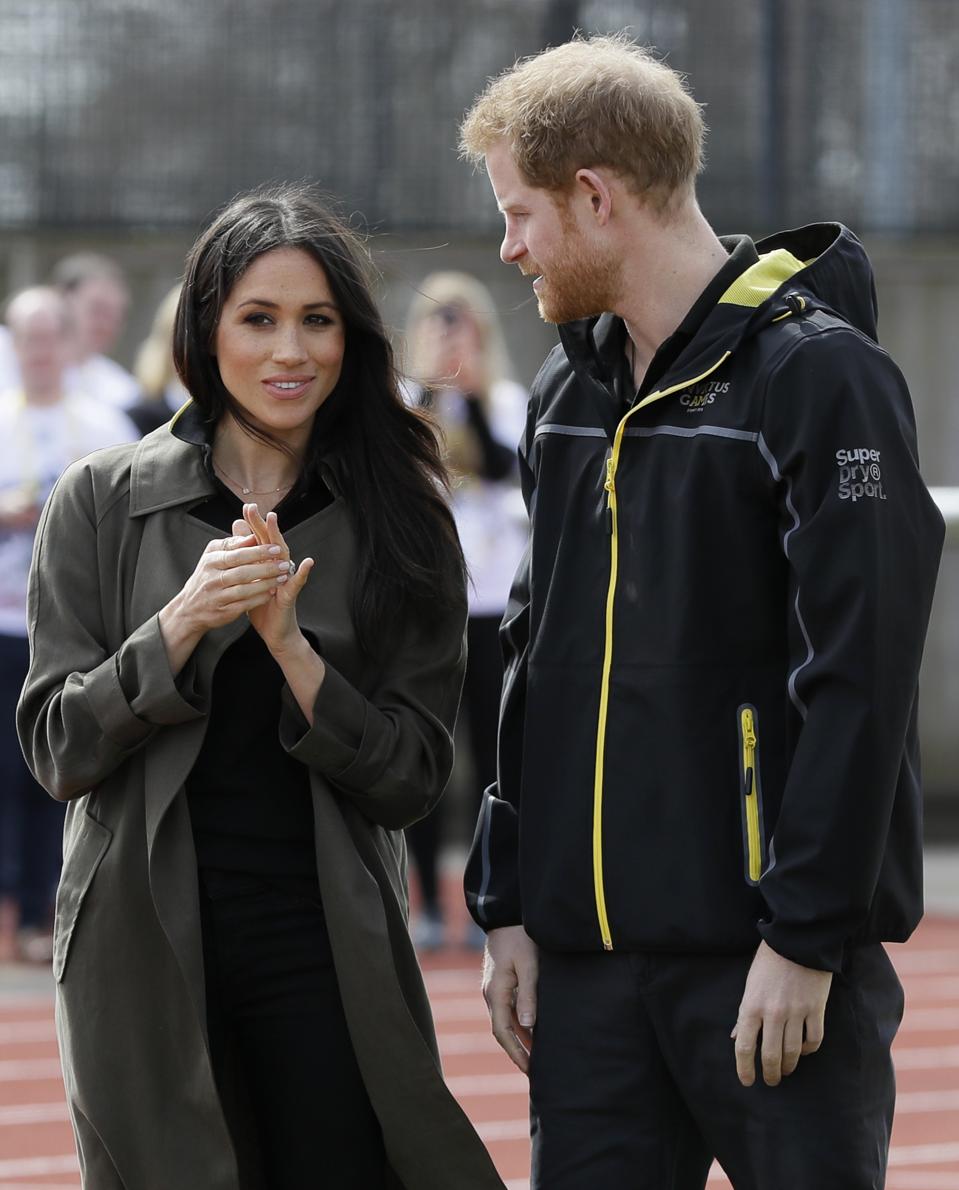 Prince Harry and Meghan’s wedding will take place on Saturday, May 19, at St George’s Chapel on the grounds of Windsor Castle, where Prince Harry was christened, starting at 11:20 a.m. when members of the royal family will begin to arrive.

More than 2,500 members of the public will watch the service from the castle grounds. BBC coverage will run from 9 a.m. until 2 p.m.

The ceremony, which starts at noon, will be conducted by the Dean of Windsor while the Archbishop of Canterbury, will officiate as the couple make their wedding vows. Meghan will be walked down the aisle by her father, Thomas.

At 1 p.m., the Queen will host a reception at St George’s Hall in Windsor Castle for 800 guests. After the ceremony the couple will take a two-mile carriage tour around the town of Windsor, greeting well-wishers, before joining their reception.

From 7 p.m., 200 friends will attend a party hosted by the Prince of Wales at Frogmore House, Windsor.