We take life for granted, interfaith marriage and interracial marriage is no big deal to most people today, but it was not only a big deal, but it was impossible once right here in these United States of America. That is the reason we honor people who may have endured every imaginable difficulty, but they paved the way for future.  It is appropriate that June 12 is celebrated as “Loving Day” across the United States in honor of their love, their fight for justice, and multiculturalism.

Mildred Jeter and Richard Loving in 1967. 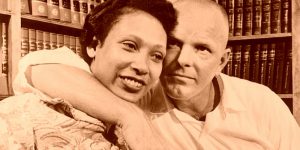 Mildred Jeter and Richard Loving, an interracial couple from Virginia, didn’t want the spotlight when they decided to get married. But they got it, made history by doing so, and changed our nation’s laws in ways that ultimately led to the 2015 decision by the Supreme Court that made same-sex marriage the law of the land.

It was actually illegal in their home state (and in 15 others) for a black and white couple to marry, so in 1958, they took a trip to Washington, D.C. to tie the knot. This directly challenged Virginia’s Racial Integrity Act of 1924, which prohibited marriage between people classified as “white” and “colored.” That law remained intact for decades because the Supreme Court previously upheld (in Pace v. Alabama) an 1883 law prohibiting interracial marriage.

Only a few weeks after returning home to Virginia, they were roused from bed in the middle of the night by the local sheriff. When they asked Mildred about her relationship to Richard, she replied simply, “I’m his wife.”

They were both arrested and sentenced to a year in jail. Richard was released the next day, and Mildred, pregnant at the time, spent several nights behind bars.

To avoid a sentencing, they made a deal with the judge to move to Washington, D.C. It was not without hardship, however; their relatives were back in Virginia, so they had to travel in and out of the state surreptitiously for visits. And Mildred hating living in a big city.

In 1963, the Civil Rights movement had just starting to get legs, Mildred wrote to Attorney General Robert Kennedy about the couple’s predicament. He replied, referring her to the American Civil Liberties Union. From Washington, Mildred and Richard eventually launched the legal case “Loving V. Virginia” that would clear the way for marriage equality for people of different races in every state.

Many times along the way, the Lovings made it clear they were not activists and really didn’t want all the attention. They just wanted to raise a family as a married couple and live a happy life in their home state. In fact, when asked if he wanted anything entered into the court record as a statement, Richard responded:

“Tell the court I love my wife, and it’s just unfair that I can’t live with her in Virginia.”

Why did this end up with the Supremes?

The Supreme Court generally avoids challenges to state law, unless those laws are a direct affront to the U.S. Constitution and when multiple state or federal appeals courts are in disagreement (as was the case with interracial marriage pre-Loving—and with same-sex marriage until last year), and unless there’s another period of challenges and appeals as our culture shifts over time. The makeup of the Court can contribute to those shifts as well, as we are now seeing that with abortion-related cases, even though Roe V. Wade was decided in 1973.

But that never happened with interracial marriage once the Loving case was decided, and it won’t likely happen with the 2015 decision on marriage equality for same-sex couples. (Unless that whole “Make America Great Again” thing really does mean returning us to the 1950s—“USA! USA! USA!”)

The landmark Loving case changed everything, and the fact that the couple’s last name was “Loving” made it all the more fabulous. Now, each year, June 12 is celebrated as “Loving Day” across the United States in honor of their love, their fight for justice, and multiculturalism.

Check out Mildred Loving’s powerful 2007 talk at an event marking the 40th anniversary of their victory.