The Church and the State of Matrimony

I am please to share articles related to interfaith wedding. Please read my partial sermon in any one of the weddings listed on this blog – Mike Ghouse

’Til Faith Do Us Part,’ by Naomi Schaefer Riley

Americans have always been a religiously diverse people, even as the definition of what counts as diversity has changed. In 1774, members of the Continental Congress protested the idea of bringing in a chaplain to lead prayers: “We were so divided in religious sentiment,” one of them explained, “that we could not join in the same act of worship.” Overwhelmingly Protestant, they nonetheless recognized the significant differences of theology and practice that divided Anglicans from Presbyterians, Baptists from Quakers.
Enlarge This Image 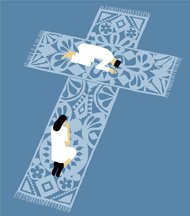 ’TIL FAITH DO US PART

How Interfaith Marriage Is Transforming America

By Naomi Schaefer Riley
234 pp. Oxford University Press. $24.95.
On this pluralistic foundation, immigrants and native-born innovators freely built. Transoceanic travel brought explosive growth to America’s Roman Catholic, Orthodox Christian and Jewish minorities from the mid-19th to the early 20th centuries. More recently, liberalized immigration laws have swelled the ranks of religious adherents who trace their theological roots to South and Southeast Asia, with Hindus, Muslims, Buddhists and Sikhs often sharing our college and corporate campuses.
In “ ’Til Faith Do Us Part,” Naomi Schaefer Riley continues the exploration of these trends, but she chooses a particular territory: beyond the challenge of interfaith proximity lies that of interfaith intimacy. The people we casually meet in class or the next cubicle may become our marriage partners, despite real religious differences. Such unions are on the increase, and Riley reminds us how touchy a subject interfaith marriage can be, among religious authorities as well as parents. Both groups fret about potential disappointments short- and long-term, including unforeseen disagreements between partners and, among the next generation, a waning of religious and ethnic identity — a kind of extinction.
Riley, a former editor at The Wall Street Journal, is neither a cheerleader nor a scold. Her book functions more as a flashing yellow light at an intersection: slow down, be alert — pay attention to what serious differences may mean to a close relationship. She brings a careful, nuanced and thoughtful approach to an often contentious subject. And she adds considerable value by including results of a poll she commissioned to survey 2,450 Americans on the subject of interfaith marriage. Thus we learn that same-faith couples report somewhat higher rates of “marital satisfaction” (8.4 on a scale of 10) than do their interfaith counterparts (7.9). But the responses by specific groups vary. For example, mainline Protestants seem happy in their interfaith unions, at 8.2 on Riley’s scale. So, too, do Roman Catholics, at 8.1. Evangelical Protestants (those who describe themselves as “born-again”) are further down the scale at 7.7. Still, given the various challenges marriage itself can pose, none of these numbers are bad.
Riley’s initial interest in the subject is personal. A Jew who married a lapsed Jehovah’s Witness, she reassured her future husband — on their first date — that her family would like him as long as he agreed their children should be raised as Jews. Years on, it’s a happy marriage. (Her sister, by the way, is married to an Orthodox rabbi.) But this is no memoir. Riley rigorously sticks to her role as inquiring journalist, crossing the nation to interview people in interfaith marriages, as well as clergymen and -women who think a great deal about these unions. She covers a broad waterfront, even including mention of niche products that cater to interfaith couples (for example, holiday cards with elves spinning dreidels).

Unsurprisingly, the couples she interviews prove most interesting for the stories they tell. Amy, an evangelical Christian married to Farid, a Muslim, have a relaxed, gently humorous way of relating to each other. David, a Jew married to a Catholic, finds his wife emphatic that their family be observant, transposing her childhood experience in church onto her new family’s Jewish practice. As her husband says, that has “forced me to be much more active and engaged and involved” as a Jew. But such success stories have their unhappy counterparts; Riley’s chapter on divorce makes for painful reading. One woman, a lapsed Christian who married a Jew and rediscovered a powerful faith after her father died, bluntly tells Riley that she would “recommend against” marrying someone of a different faith. “Marriage is hard enough to not add the added dimension of such a fundamental disagreement,” she said. “Both faiths warn against marrying outside the faith for good reasons.”
Deeply interwoven with Riley’s narrative is an inevitable question: How do the children of these unions turn out? Will they have a religious identity or practice in a nation where pollsters tell us the population at large values religion?

This is actually an old question. The rifle barrels of the Revolution had barely cooled when a French immigrant, J. Hector St. John de Crèvecoeur, published “Letters From an American Farmer,” a book-length description of the emerging nation. He frankly marveled at the tolerance that allowed Catholics, Lutherans and Protestant sectaries to coexist peacefully. But he also worried about the consequences for religion: “It may happen that the daughter of the Catholic will marry the son of the seceder, and settle by themselves at a distance from their parents. What religious education will they give their children? A very imperfect one.”
But maybe not. The durability of religious affiliations in America seems to defy the dire predictions. Religionists have fretted about spiritual decline since the second generation of the Puritans. Had Crèvecoeur been right, his co-national Alexis de Tocqueville wouldn’t have discovered a population steeped in religious faith and practice. Tocqueville arrived in 1831, ahead of the great waves of immigration, yet at a time when prophets enlivened the spiritual scene. He visited a colony of Shakers near Albany, followers of Mother Ann Lee. But he missed the biggest religious story of the time: the revelations of Joseph Smith that led to the founding of what would become the Church of Jesus Christ of Latter-day Saints. Riley notes that Mormons — while distinctly friendly to the non-Mormon spouses of mixed-faith couples — are the least likely among major religious groups to form interfaith marriages. She attributes this in part to the high demands the church makes on young men and women to serve as missionaries in their late teens, a deeply formative religious experience.
But back to that question about the progeny of interfaith couples. Are Riley’s findings intriguing? Yes, certainly. But they do not seem to fit a clear model. Take the case of Eileen, a Roman Catholic who had three children with her Jewish husband. Now adults, “one identifies as Catholic, one as Jewish, and one she describes as a ‘philosophy major.’ ”

And then there’s Judy, a Jew who also married a Roman Catholic — in this instance in 1964, with disapproval from both families. Their union lasted until her husband’s death. Their grown children include two who are religiously unaffiliated and a third who is a Roman Catholic priest. The cousins include Orthodox Jews. Perhaps a plot for a sitcom can be found here. But the issue goes well beyond entertainment. Is interfaith marriage good for America? To the extent that it dispels ignorance, punches holes in stereotypes and deflates bias, I would say it surely can be.
Gustav Niebuhr, who teaches at Syracuse University, is the author of “Beyond Tolerance: Searching for Interfaith Understanding in America.”